Welcome to my site, about all things violin and viola. Here you will find interesting tips and pointers, and thoughts about playing these beautiful instruments.

The Circle of 5ths is a fantastic visual representation of the relationship between different scales and keys in western classical music. It can look a little daunting at first, but once you start to understand how it works, it can be very helpful in understanding music theory. Here's what it looks like. 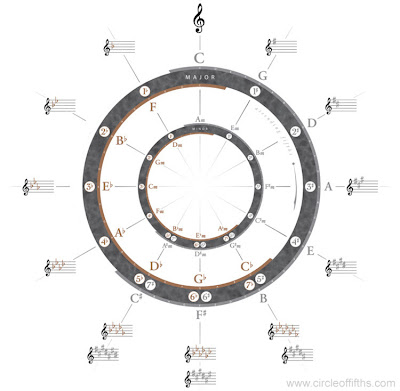 So what does all this mean?

The circle works using the interval of a 5th - the distance between the open strings on your instrument eg. D to A. Or on a piano, counting seven semitones (half steps) up from a note (seven notes including black keys to the right).

This means that every step to the right of the circle moves up a 5th. Every step left moves down a 5th.

This also works in the reverse direction (from our starting point of C major) with flats, moving down a 5th each time.

The outside circle of the diagram shows you the major scale keys. However every key signature is shared by two types of scale - the major and minor. The major and minor scales that share a key signature are often referred to as 'relatives'. The relative scale of C major is A minor. The inner circle therefore shows you the minor scale keys, starting with A minor (with no sharps or flats). It then works in the exact same way as the outer circle.

This is the basics of the circle. In Circle of 5ths - part 2 I go into further detail about the order of key signatures, and 'relative' scales.
Posted by AnnaC at 12:39

Email ThisBlogThis!Share to TwitterShare to FacebookShare to Pinterest
Labels: Theory